A journey through the golden age of the harmonium

After Alexandre Debain introduced the first ‘official’ harmonium in about 1840, a considerable amount of music was written for the instrument. For numerous romantic composers the harmonium – with its little metal reeds, keyboard, bellows and pedals – became an effective medium, with its own sonority, specific tonal colour and unique expressivity. Its dynamic range in particular, thanks to the Expression stop, greatly appealed to the romantic spirit of the age.

Reed instruments are found almost all over the world. In the Far East wind instruments with reeds were known many centuries ago: the sheng and sho may be considered akin to the harmonium. Thanks to western missionaries and travellers, in countries like Pakistan, India and Afghanistan a small portable harmonium made its entry into improvised music in the nineteenth century.

In this harmonium atlas we travel only across the world of western culture. A map of the world looked quite different in the nineteenth century to how it is today. Some countries did not yet exist as independent states, or belonged to monarchies that have long since disappeared. My geographical organisation of the recordings is based on a number of larger areas: Eastern Europe (Bohemia, Moravia, Slovakia, Hungary, Russia, Lithuania), Central Europe (Germany, Austria), Northern Europe (Scandinavia), English-speaking countries (England, Australia, America), the Low Countries (the Netherlands and Belgium) and Southern Europe (Spain and Italy). Each of the four CDs ends with music from France, the birthplace of the pressure harmonium. 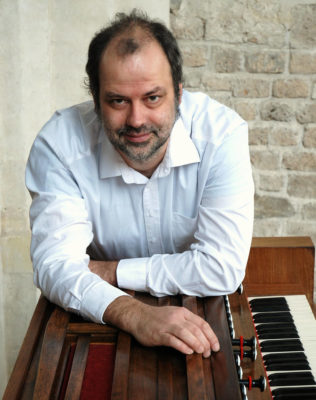 Composers are arranged according to their place of birth and the country in which that place was then situated. This implies that the ‘Frenchman’ César Franck (born in Liège), for instance, is in the Belgian block; a composer like George Templeton Strong (who worked for most of his life in Switzerland) is present as a musical ambassador of his native country America. Having chosen my repertoire, the next question was: what instruments will do most justice to the music? Connoisseurs know that the harmonium does not exist. There are huge differences between a so-called pressure harmonium – where the air is pumped outwards – and the more intimate suction harmonium – where the air is sucked inwards. Within these two categories there is also considerable variation, since each builder had his own predilections. Here again, my choices have been guided primarily by my own preferences. I have played most of the pieces on one of the available Mustel pressure harmoniums, even though some composers could only have dreamed of such a complete instrument. I have borne in mind here that pressure instruments were not only customary in France, Belgium, southern Europe and elsewhere, but were also available in the remainder of Europe and in North America, even though suction harmoniums generally enjoyed great popularity.